While fashion, beauty and lifestyle influencers have traditionally dominated the influencer marketing sphere, recent years have seen new sectors take center stage. The food and beverage industry have begun to recognise the value in partnering with trusted brand advocates to reach wider audiences, generate traffic and scale their revenue.

The latest TikTok baked feta craze, which spiked feta sales by 300%, proved that no brand is exempt from going viral. That said, with up and coming brands continuously entering the market, how do you remain top of mind amongst consumers?

Evaluating the month-on-month progress of your brand’s influencer Share of Voice is crucial to monitoring your market ranking, remaining competitive, and proving the value of your campaigns.

In Wearisma’s bespoke Share of Voice analysis, we’ll be diving into the Paid and Earned media that drove the product launches and brand buzz of six globally-recognised confectionery brands, focusing on the European markets in August-October 2020.

According to Wearisma’s Share of Voice report, Snickers achieved the highest share of influencers and influencer mentions (26%). This landed specifically within the <20k-250k follower groups, in which the top 5 influencers by Engagement Rate averaged an impressive 15.8%, 5x the industry average. Wearisma’s City Data further shows that Snickers secured 87% of the share of Engagements in Berlin. These statistics are reflected in Snickers’ frequent mentions by German food bloggers recreating snickers-inspired recipes. For instance, Arix (@foodforarixx)’s “protein snickers porridge” generated over 22% in Engagement Rate, which is more than 7% above her average Engagement Rate for Instagram and 9x the industry average.

Discovering the voices who organically advocate for your brand is fundamental to any influencer strategy, especially with the emergence of rapidly-growing platforms, such as TikTok. For example, Becky Excell’s (@beckyexcell ) “Snickers cookies” recipe secured an impressive 47% Engagement Rate on TikTok. Wearisma’s audience data shows that Becky’s content caters primarily to the UK, Australia and the US, with her largest demographic on Instagram sitting within the 25-34 age group. With 232k+ followers across 4 social platforms, partnering with influencers like Becky is a sure fire way to tap into a wider audience while ensuring that your brand remains top of mind on emerging social platforms.

German-born chocolate brand Milka has dominated the European confectionery space for over a century. In this Share of Voice report, Milka’s #MijnMilkaSmaak and #OurMilkaMoments campaigns contributed to 29% of their overall Engagements. By tapping into large-scale Dutch public figures, such as Shelly Sterk (@shellysterk) and Thomas van Grinsven (@thomasgewoon), Milka secured the highest share of both the 250-500k follower group (27%) and overall Media Value (23%). Partnering with Milka to promote their #MijnMilkaSmaak (“#MyMilkaTaste”) competition, Thomas generated an impressive 11.63% Engagement Rate, which is nearly 4x the market average, by prompting his 349k+ followers to curate their own Milka flavours in the comments. 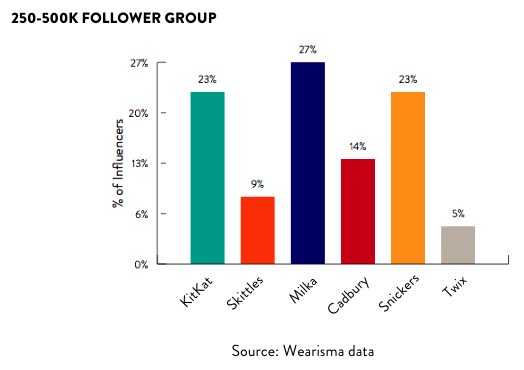 Outside of Milka’s paid partnerships, organic TikTok content contributed to a strong rise in Engagements for milka in September-October. Bali-based influencer Daniel (@danielsreality)’s comedic “stealing milka” TikTok generated a staggering 835% Engagement Rate, which is more than 20x the industry average. Similarly, French influencer Chloe (@clheo_)’s TikTok generated over 3.6x the industry average with a 731% Engagement Rate. Despite having a micro-following of 1.6k, TikTok is designed in a way that allows for virality across the board, regardless of following, reach or location.

Wearisma’s TikTok influencer discovery tool hereby allows you to unlock the metrics behind influencers of all follower sizes to find the creative voices who can drive your brand buzz into new demographics.

This Share of Voice report reflects how the iconic ‘taste the rainbow’ Skittles are celebrated by all demographics, with Wearisma’s influencer Category Data showing that 46% of Skittles’ Engagements deriving from “lifestyle” influencers. The self-proclaimed family-driven “food fanatic” Big Daddy B (@bigdaddybsfoods) generated an impressive 33% Engagement Rate for Skittles in a sweets giveaway post, which is more than 5x his Instagram average, and 10x the market average.

Skittles is also widely known for providing a fun kids activity; ‘the Skittles science experiment’. Sharing his fatherhood journey on Instagram, UK influencer Sergei Urbans (@thedadlab) contributed to Skittles’ 13% share of the 1m+ follower group, reposting the video that he quotes “blew up the internet” in 2016. Similarly, the German Vfx Family (@fremdwelt)’s TikTok science experiment generated over 55% in Engagement Rate in November, which is 15% higher than the TikTok market average for a following of their size. Unlike the other brands highlighted in this Share of Voice, Skittles also has a unique selling point with its plant-based appeal. For example, recipe curator and micro-influencer Bethany (@bethanys.vegan.kitchen)’s plant-based giveaway featured Skittles amongst other confectionery brands, achieving a 7.54% Engagement Rate; more than double the industry average.

When growing your influencer strategy, it’s essential to expand your audience pool to wider demographics and find your niche amongst the competition. By simply searching a hashtag or handle that relates to any given trend, brand or keyword, Wearisma’s Brand Analytics tool allows you to unlock the brand advocates who truly speak to your audience, such as vegan and family-oriented influencers, or experts in your field.

Despite having the 3rd highest share of Engagements and Media Value, Twix’s average Engagements and Media Value per influencer take the top place with 6.2k and 11k respectively. Interestingly, this is rooted purely in organic content. Eloise Head (@fitwaffle) generated over 19k in Media Value by sharing her ‘3 ingredient white Twix rocky road’ with her predominantly female, British audience. With an average TikTok Engagement Rate of 129%, nearly 4x the market average, working with influencers who have a strong cross-platform presence like Eloise is a promising way of tapping into a wider, growing demographic. Similarly, actress Charlotte Hope (@charlottehope8)’s comedic post inserting a Twix into an ad for ‘The Spanish Princess’ expands Twix’s audience pool beyond the world of “foodstagram”, particularly as her audience’s engagement increases by 3.5% when mentioning beauty-related content. 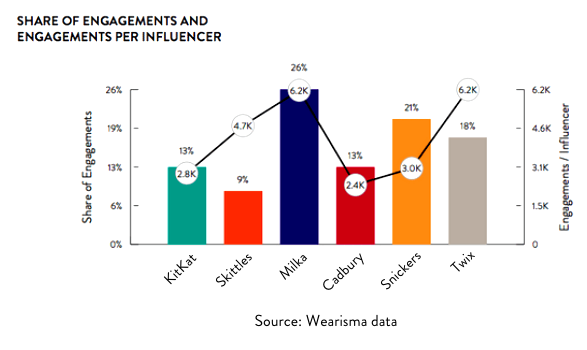 Discovering the advocates behind your Earned media is especially important when launching a new product into a market. The release of Twix’s limited edition ‘Winter Spice’ bar saw consumers flock to their local convenience stores, with one review by Chocolatier stating “I blame Instagram’s influencers as to why I spent weeks hunting down the Twix Winter Spice bar.” Spearheaded by the likes of Chloe McQuirk (@newgirlintoon), Chloe’s new ‘Winter Spice’ themed night-in generated an impressive 9.72% Engagement Rate; more than 3x the market average.

Similarly, TikToker Jess (@thefatfunnyone) featured a “throwback Twix bar” amongst her Aldi bargains, generating a staggering 312% Engagement Rate, which is 210% higher than the TikTok market average for a following of her size. Understanding which products are generating the biggest brand buzz amongst your consumers is key to not only launching new ones, but understanding which markets will provide the greatest return on your influencer investments.

Unlike other brands in this Share of Voice report, Cadbury’s Engagements are rooted primarily in its paid partnerships. Celebrating the release of its Cadbury Heroes League gaming competition, the campaign saw 12 large-scale influencers training a family member to battle on Street Fighter V. Bringing a comedic value by incorporating their mums into their posts, British celebrities Roman Kemp (@romankemp) and Sam Thompson (@samthompsonuk) secured the top two posts by Engagement, with 24.4k and 27.4k respectively, contributing to 57% of Cadbury’s Paid Engagement in the Share of Voice report. Further featuring the likes of Theo Baker (@theobaker_) and Ashley Banjo (@ashleybanjogram), Cadbury secured the highest share of the 500k-1m+ follower groups, as well as 75% of London-based Engagements.

Collaborating with large-scale influencers who seamlessly fit your niche is an excellent way to generate brand awareness amongst your target region, however working with a larger pool of micro- to mid-range influencers can be highly effective when launching products over a longer period of time. In collaboration with Cadbury’s ice cream launches, the paid influencers featured in this report generated a 0.4% higher Engagement Rate than organic content, contributing to Cadbury’s highest share of the <20k follower group (24%). In line with the brand’s target audience, the top 10 posts by Engagement derived from family-oriented and blogger accounts, such as Katie Ellison (@katie_ellison) and Vaida (@fashionbyvaida). Using Wearisma’s Advanced Search filters to find the advocates who truly fit your brief, such as comedic or family-driven accounts, is key to ensuring that your campaign is reaching the right demographic.

In this Share of Voice report, Nestle’s partnership with Nintendo, in which Nestle’s brands Lion and KitKat are raffling off gaming packages with Nintendo Switch, contributed to 32% of KitKat’s share of Engagements in Germany. The top two performing posts for KitKat derive from Jana Riva (@janariva) and Veronika (@missveraa_)’s sponsored giveaways in support of the collaboration, securing the brand over over 60k Engagements and an impressive average Engagement Rate of 20.5%, which is 7x the industry average. Interestingly, Jana’s Engagement Rate increases by 8.68% when mentioning fashion-related brands, and Veronika’s Engagement Rate peaks when posting health and fitness content. This reflects how partnering with influencers outside of your industry for a sponsored giveaway can ensure a higher Engagement while marketing your launch to a wider audience.

KitKat’s #BreakInStyle gifted campaign, which launched in support of its KitKat Gold bar, further contributed to its 28% share of influencer mentions in France. The lucrative KitKat PR packages clearly resonated well with influencers’ audiences, with the top 5 posts by Engagement Rate averaging 6.56%; double the industry average. Wearisma’s Category Data highlights how these influencers all fall under family, lifestyle, and blogger categories, forming 29% of KitKat’s overall Media Value. Amanda (@amandinetst)’s paid post secured the top ranking by Engagement Rate with 7.87%, which is more than double the industry average. On average, Amanda’s Engagement Rate also increases by 0.8% when mentioning sponsored content.

Using Wearisma’s advanced filters to understand whether paid content is well received by influencers’ audiences is crucial in order to effectively forecast results and make data-backed decisions on your influencer partnerships.

Monitoring your brand’s Share of Voice is key to understanding your positioning and progress within the market, and allowing you to prove the effectiveness of your campaigns against top competitors. That said, if you’d like to view the full report, or are interested in analysing your market Share of Voice, get in touch!