As the only provider of influencer Share of Voice reports, Wearisma’s unique competitor analysis allows you to understand the impact of your activations on your overall brand.

Wearisma’s reports are designed to solve the questions that standard analytics tools aren’t equipped to answer, such as:

To highlight the impact of specific activations and influencer partnerships on your overall brand, we’ll be delving into the metrics behind an example Share of Voice report, which compares the performances of five beloved jewellery brands across August-September in the UK last year.

In celebration of its 20th anniversary last year, Pandora launched a limited edition charm collection alongside a widespread influencer campaign. Since August 2020, Wearisma’s advanced Brand Analytics reveal that the #VoicesOfPandora and #SomethingAboutYou campaign has reached a staggering 25 million followers.

In this report, Pandora secured the majority of overall Engagements, following per influencer, and Media Value. The value was generated by Pandora’s pool of large-scale influencers, such as Louise Thompson (@louisethompson) and Lydia Rose (@fashioninflux), which translated to Pandora’s share of 56% in the 1m+ followers group. By utilising Wearisma’s audience data to discover influencers whose followers match your target demographic, selecting the right group of large-scale influencers can be highly effective for driving awareness ahead of product launches.

Pandora’s campaign further reached global audiences by tapping into the fastest growing social platform, TikTok. Lewys Ball’s (@lookingforlewys) creative TikTok, which matched Pandora’s airplane charm with his reminder to “catch flights not feelings”, achieved a 74% Engagement Rate, which is 29% higher than the market average. Similarly, by posting across both Instagram and TikTok, Wearisma’s audience data highlights how Denis Colak (@deniscolak)’s promotion of Pandora’s Moments Charm Bracelet tapped into consumers across the globe, mostly within the UK, Russia, the US and Brazil. 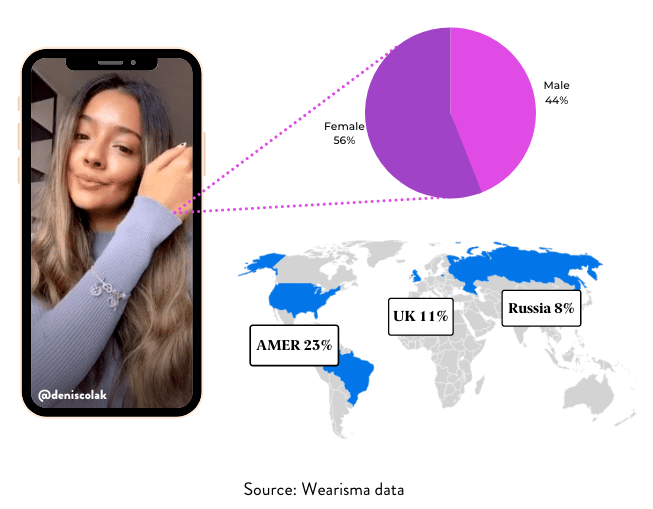 Leading the way in demi-fine jewellery, Missoma ranked within the top 2 across the board for its share of influencers, mentions, Engagements, following and Media Value. While one-off partnerships with large-scale influencers, such as Claudia Schiffer, contributed to 18% of Missoma’s Engagements, Missoma’s long-standing partnerships prove to serve the brand well.Both formed off the back of posts organically tagging Missoma, Tamara Kalinic (@tamara) and Nadia Anya (@nadiaanya)’s content supporting the launch of Missoma’s Autumn/Winter ‘Let Them Create’ collection collectively generated over 19% of Missoma’s overall Engagements. Using Wearisma’s Brand Analytics to discover key influencers who organically rave about your brand is in turn a sure fire way to increase your Engagements, and reach the right audiences. 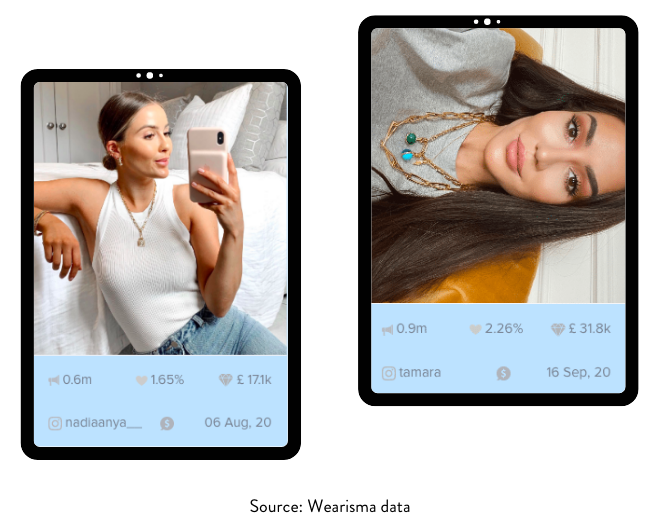 Generally, Missoma’s strong cross-platform presence has largely contributed to its overall reach and Engagements in both paid and Earned media. For example, the top 4 YouTube videos ranked by Engagement Rate for Missoma’s #LucyWilliamsxMissoma campaign averaged an impressive 34%, which is 10% higher than the industry average. Moreover, by partnering with fashion, beauty and lifestyle page 英伦五花肉 (@英伦五花肉) across two posts on Weibo, Missoma successfully tapped into its 1.1m+ Chinese audience.

Finding the right influencers in order to position your brand amongst the 500+ million monthly active users on Weibo is an exciting challenge made easier with Wearisma’s advanced APAC capabilities. For example, using Wearisma’s tools and expertise, a global luxury brand saw their mentions double and achieved an 83% growth in Engagement on Weibo in 2020. Get in touch to see how we can help leverage your brand in China.

Monica Vinader taps into the largest share of micro-influencers

Known for its distinctive collections of timeless jewellery, Monica Vinader continues to bridge the gap between fine jewellery and luxury styling. Securing 24% of all influencer mentions and the largest share of micro-influencers, Monica Vinader’s sustainably-made #MVxDoina collection clearly spoke to the brand’s loyal audience. For instance, Cece (@ceceldn)’s post celebrating the brand’s 100% recycled silver and vermeil collection achieved a 16.5% Engagement Rate, which is more than 5x the industry average. 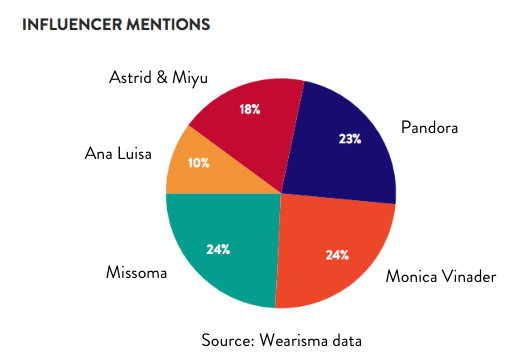 When scaling into new markets, collaborating with influencers who show an active affiliation with your brand’s values is a promising tactic to ensure success. Having previously partnered with ethically-driven brands, such as Redone and Stojo, Jelena Marija (@jelena.marija) was evidently an ideal match for Monica Vinader, securing a 9.9% Engagement Rate for the #MVxDoina collection (3x the industry average) amongst her American and Australian audience. 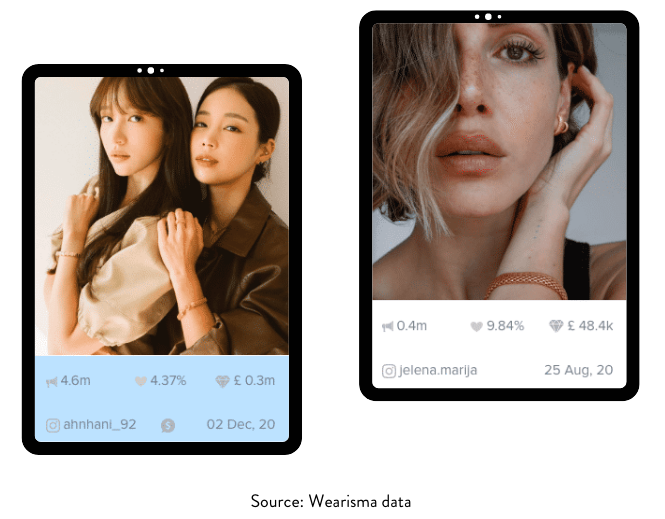 Using Wearisma’s platform to discover influencers whose messaging, brand partnerships and audience interests align with your campaigns is therefore key to tap into new demographics, drive traffic, and track clicks and sales to prove the effectiveness of your campaigns.

Loved for its delicate and vibrant collections, Astrid & Miyu has quickly become one of the fastest-growing jewellery brands in the UK. With their highest share of influencers falling predominantly in the <20k-80k follower groups, this report’s City Data shows that Astrid & Miyu is the leading contender in Northern Ireland and the North of England. Specifically, Astrid & Miyu’s gifting strategy has secured an impressive return on investment for the brand, with the likes of Eboni Dixon (@eboniivoryblog) and Bibi Bagnall (@bibi_bagnall)’s posts generating over 7% in Engagement rate, which is more than double the industry average. 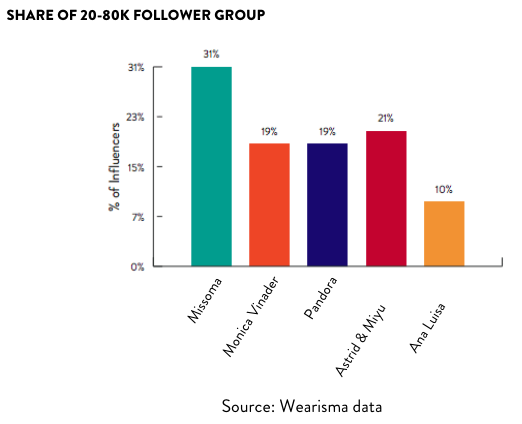 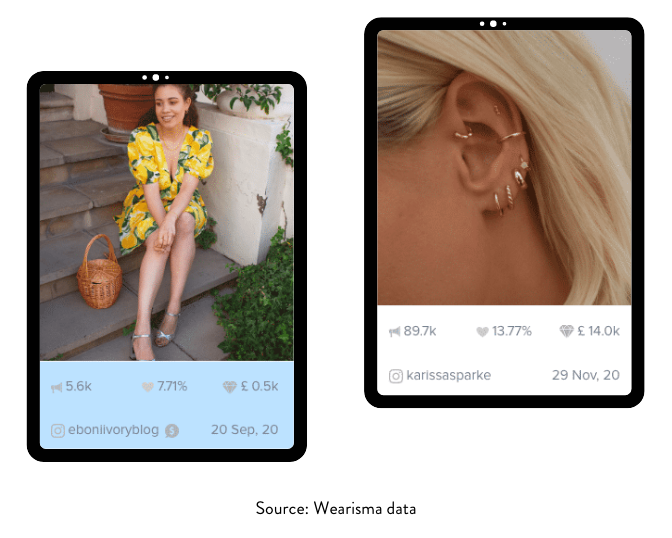 Born out of New York City, Ana Luisa prides itself on producing sustainably-made jewellery with a conscience. While its audience lies primarily in the US, this Share of Voice report highlights how Ana Luisa’s activations continue to foster its presence across the globe. As well as securing the second highest share of influencers across the 80k-500k follower groups, Ana Luisa’s top 5 influencers in this category average an impressive 9%, which is 3x the industry average. 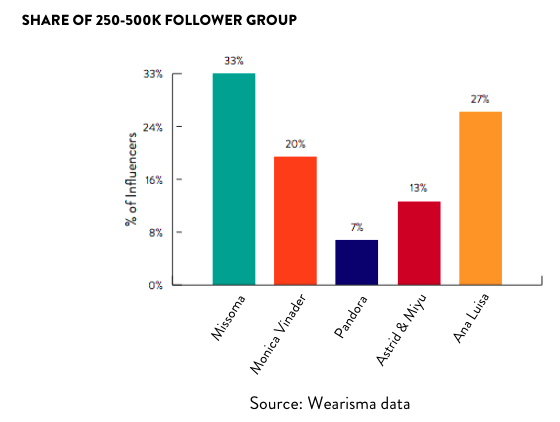 Uniquely, 3 of Ana Luisa’s top 7 performing influencers are in this case make-up artists, such as Holly Aldous (@hollifer__) and Eve Jenkins (@evejenkinsmua). Generating over 24% of Ana Luisa’s overall Engagements, make-up tutorials are clearly an excellent way of fusing jewellery with the brand’s creativity, which resonates with Ana Luisa’s APAC audiences, too. Japanese make-up artist Chie Hidika’s (@chiehidikamua) YouTube videos have garnered over 1.6 million Engagements for Ana Luisa in 2020, with an average of 61.2%, which is more than double the YouTube industry average in Japan. 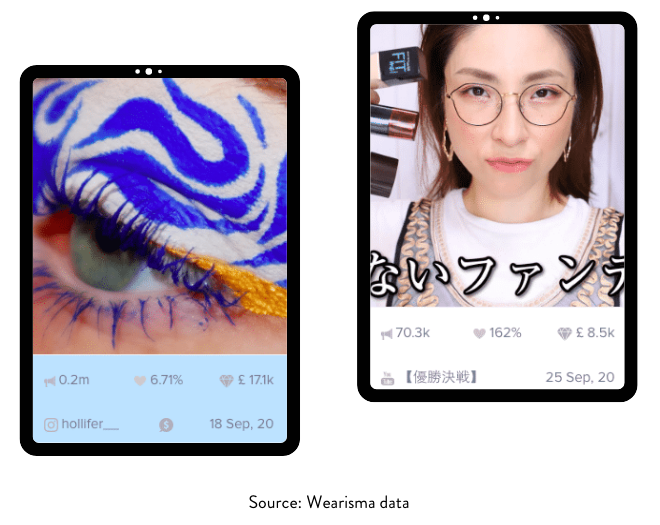 Monitoring your brand’s Share of Voice is key to understanding your positioning and progress within the market, and allowing you to prove the effectiveness of your campaigns against top competitors. That said, if you’d like to view the full report, or are interested in analysing your market Share of Voice, get in touch!